Republican Senators Haven’t Represented a Majority of Voters Since 1996 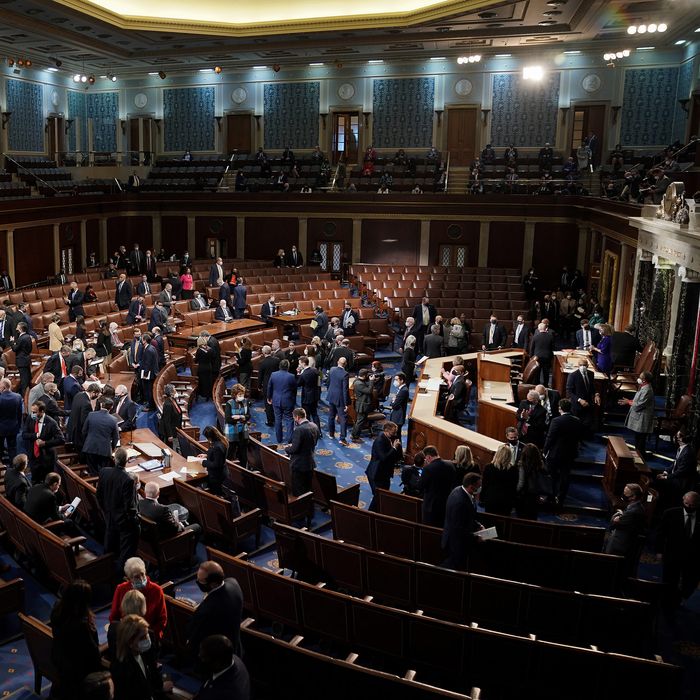 The Senate does not speak for you. Photo: Greg Nash/Pool/Getty Images

As we wait for the Senate parliamentarian to let us know if 41 senators will be able to block a minimum-wage increase that a comfortable majority of Americans supports, it’s as good a time as any to be reminded of the non-representative nature of the Senate Republican Conference.

Daily Kos Elections has come up with a chart displaying the percentage of the population represented by senators from each party since 1990, along with the percentage of Senate votes each party captured (displayed in three-cycle averages, since only one-third of the Senate is up for reelection every two years):

Republican senators haven’t represented a majority of the U.S. population since 1996 and haven’t together won a majority of Senate votes since 1998. Yet the GOP controlled the Senate from 1995 through 2007 (with a brief interregnum in 2001–02 after a party switch by Jim Jeffords) and again from 2015 until 2021.

As Stephen Wolf observed in his write-up of the results, there have been consequences for this disconnect:

Five Supreme Court justices (and many more lower court judges) were confirmed by senates where the GOP majority was elected with less popular support than Democrats. Those right-wing hardliners are now poised to use their control over the court to attack voting rights and preserve Republican gerrymanders while striking down progressive policies. This same minority rule has also paved the way for massive tax cuts for the rich under George W. Bush and Donald Trump that have facilitated an explosion in economic inequality.

Thanks to the filibuster, of course, on many key measures, the 43.5 percent of voters represented by a Republican minority in the Senate have as much clout as the 44.7 percent represented by a Republican majority when the GOP won a trifecta four years ago. That’s why Democrats are trying to cram as much legislation as they can into a budget-reconciliation bill that cannot be filibustered and why the parliamentarian’s ruling on the scope of that bill is such a big deal for Americans trying to survive on minimum wage.

Understanding the realities of our constitutional system means recognizing its injustices, too — along with injustices like the filibuster, which cannot be attributed to the Founders.

Daily news about the politics, business, and technology shaping our world.