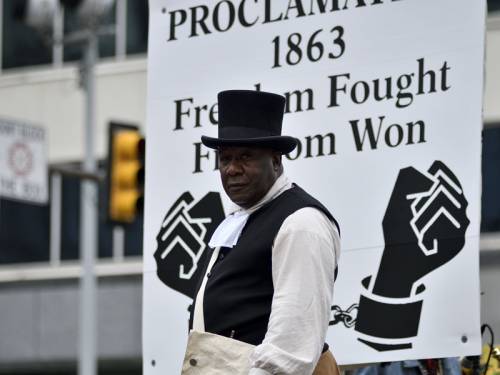 Ask Bettie J. Durrah, a longtime Presbyterian from Atlanta, what she remembers of the 211th General Assembly (1999) and she will tell you how her fellow African Americans perplexed delegates in the Fort Worth, Texas, convention hall by gathering to celebrate Juneteenth.

“Juneteenth” — a combination of the words “June” and “nineteenth” — commemorates when Texas’ enslaved people were notified of their status as free citizens, which occurred on June 19, 1865. Texas was the last state to inform its people, with the notification coming two years, six months and 19 days after President Abraham Lincoln’s Emancipation Proclamation.

June 19 has come to represent Independence Day to African Americans more so than July 4. Yet the day has gone mostly unheard of by many Americans, let alone Presbyterians.

“The delegates found the celebration to be a curious sight,” Durrah said, noting that some mistook the fanfare for an early Fourth of July celebration. It was an opportunity, she says, to educate her fellow Presbyterians about the significance of Juneteenth, which is also called Freedom Day.

Today, educational opportunities abound as Juneteenth conversations — and observances — are growing beyond the African American community.

According to Dee Evans, national director of communications at the National Juneteenth Observance Foundation, in 2019, 46 states and the District of Columbia recognized Juneteenth as a state holiday or day of recognition. And, in 2018, a resolution recognizing Juneteenth as a national holiday passed the Senate.

Despite the recognition, work still needs to be done to educate the public on the significance of Juneteenth — a quintessential American holiday that continues capturing the tension between the American ideal of equality and the reality of how that vision is eclipsed by systems of injustice.

“We still wrestle for all to be free today,” said the Rev. Denise Anderson, coordinator for racial and intercultural justice in the Presbyterian Mission Agency.

Dr. Lydia Willingham, a lay pastor in Trinity Presbytery and a member of Ladson Presbyterian Church in Columbia, South Carolina, says educating younger generations about Juneteenth is a “holy calling,” underscored by the miracle “that our ancestors survived slavery.”

While Juneteenth is a time for celebration, Willingham, who also serves as president of the National Black Presbyterian Women Caucus, sees it as a time to acknowledge the brutality of slavery and the blood that was shed. That’s a reason why, she says, the wearing of red and the eating of red foods, such as red velvet cake, is often part of Juneteenth. The red also symbolizes the redemptive blood of Christ, making Juneteenth “more than a freedom story, but a faith story.”

“Our people prayed to be free from their bondage, and their prayers were answered,” said Willingham. “It is a vital role of our congregations to pass on the stories of those who endured and fought against slavery.”

Helen Toney, a retired educator and member of Oakhurst Presbyterian Church in Decatur, Georgia, has vivid memories of celebrating Emancipation Day during August in Obion County, Tennessee, in the 1930s.

Toney was born in 1924 and heard stories of slavery firsthand from relatives like her great-grandmother, who was 16 when slavery ended. She also heard stories of perseverance that made the freedom celebrations “sweeter.”

Dr. Whitney Peoples, director and coordinator of diversity, equity and inclusion at the University of Michigan, views preserving stories like Toney’s as a powerful ministry opportunity for churches.

“Many churches have unique access to these freedom narratives, and it is important to create spaces to share them. Faith communities are often intergenerational, and the pews are full of living history. It is important to capture these valuable African American stories and traditions while we can,” said Peoples.

While many communities around the nation experienced emancipation from slavery on different dates, Juneteenth is the closest the nation has to a nationally recognized Emancipation Day. And a new generation is emerging to champion the celebration of Juneteenth.

A quick search of #Juneteenth on social media brings up thousands of images about the holiday, while a growing number of blogs and podcasts disseminate information about its history.

Many black millennials see Juneteenth as an alternative celebration to July Fourth. A common sentiment is that the vision for equality set forth in the Declaration of Independence in 1776 did not include those of African descent.

In contrast, Juneteenth represents a movement toward freedom for all people — and it can be celebrated by all people.

Yet the ways that Americans observe the holiday may change based on one’s race and ethnicity. For the rev. abby mohaupt (name lowercased as requested), moderator of Fossil Free PCUSA, Juneteenth is a call for reckoning and repentance for the sins of racism. She sees the holiday as an invitation for white Presbyterians to listen deeply to those who are descendants of enslaved people and as a time to confess their own complicity in institutionalized injustice.

Anderson agrees, cautioning white congregations to temper the celebrations so that the meaning of Juneteenth does not get lost.

“I don’t want congregations co-opting the celebration without engaging in the difficult history and lingering present,” she said. “Black and brown people are still incarcerated at disproportionate rates. I would hope white congregations take Juneteenth as an opportunity to wrestle with that and avail themselves to criminal justice reform in their communities.”

Dr. Kathy Dawson, the Benton Family Associate Professor of Christian Education at Columbia Theological Seminary, sees Juneteenth as an opportunity to grapple with slaveholding in Presbyterian history. She also invites congregations to use Juneteenth as a time to hold educational offerings on current human trafficking.

For the Rev. Jeff Geary, senior pastor of White Plains Presbyterian Church in New York, rooting his congregation firmly in a “theology of place” helps to put faith in context.

White Plains Presbyterian, founded in 1714, is just two blocks from the historic location where the Declaration of Independence was first read and adopted by a colonial government. The church uses the time between Juneteenth and July Fourth to revisit the Declaration of Independence, while putting that document in conversation with the works of Sojourner Truth, Frederick Douglass and other freedom fighters.

Willingham says that her congregation, Ladson Presbyterian, walks their youth down to the Mann-Simons Cottage in Columbia, South Carolina. Celia Mann and Ben Delane were African Americans who walked from Charleston to Columbia to find freedom in the early 1840s. Their family home is now a museum that tells the story of Columbia’s African American community from enslavement to the present.

“The blood and tears of our ancestors truly meant something. We must remember that we are the sum of those parts,” Willingham said, adding that the bloodshed did not end with emancipation. “African Americans endured decades of disenfranchisement, dehumanization and domestic terrorism following emancipation, and that struggle for complete equality continues until this day.”

The Ladson Presbyterian congregation also makes it a point to sing James Weldon Johnson’s “Lift Every Voice and Sing” on Juneteenth, Willingham says.

The lyrics to the song, known as the Black National Anthem, resonate deeply for her. She says the line that is especially poignant to her that captures Juneteenth’s past, present and future is: “Sing a song full of the faith that the dark past has taught us. Sing a song full of the hope that the present has brought us. Facing the rising sun of our new day begun. Let us march on till victory is won.”

Presbyterians are marching on. This Juneteenth, Presbyterians were planning to gather at General Assembly to remember the past, to be honest about the present and to work toward a more just future.

According to Anderson, the service of lament and celebration was to be held the afternoon of June 19 in the lobby of the Baltimore Convention Center during the 224th General Assembly. Unlike the 1999 gathering that Durrah remembers as being a “curious sight,” this observance would have been different, with more Presbyterians having heard of the hard work for freedom that continues today. Anderson had hoped “to bring awareness to the lingering impacts of slavery and the ways in which slavery in other forms persist.”

But Juneteenth is not the only day to raise that awareness. Every day is one to “sing a song full of faith.”

Zeena Regis is a member of Oakhurst Presbyterian Church in Decatur, Georgia.